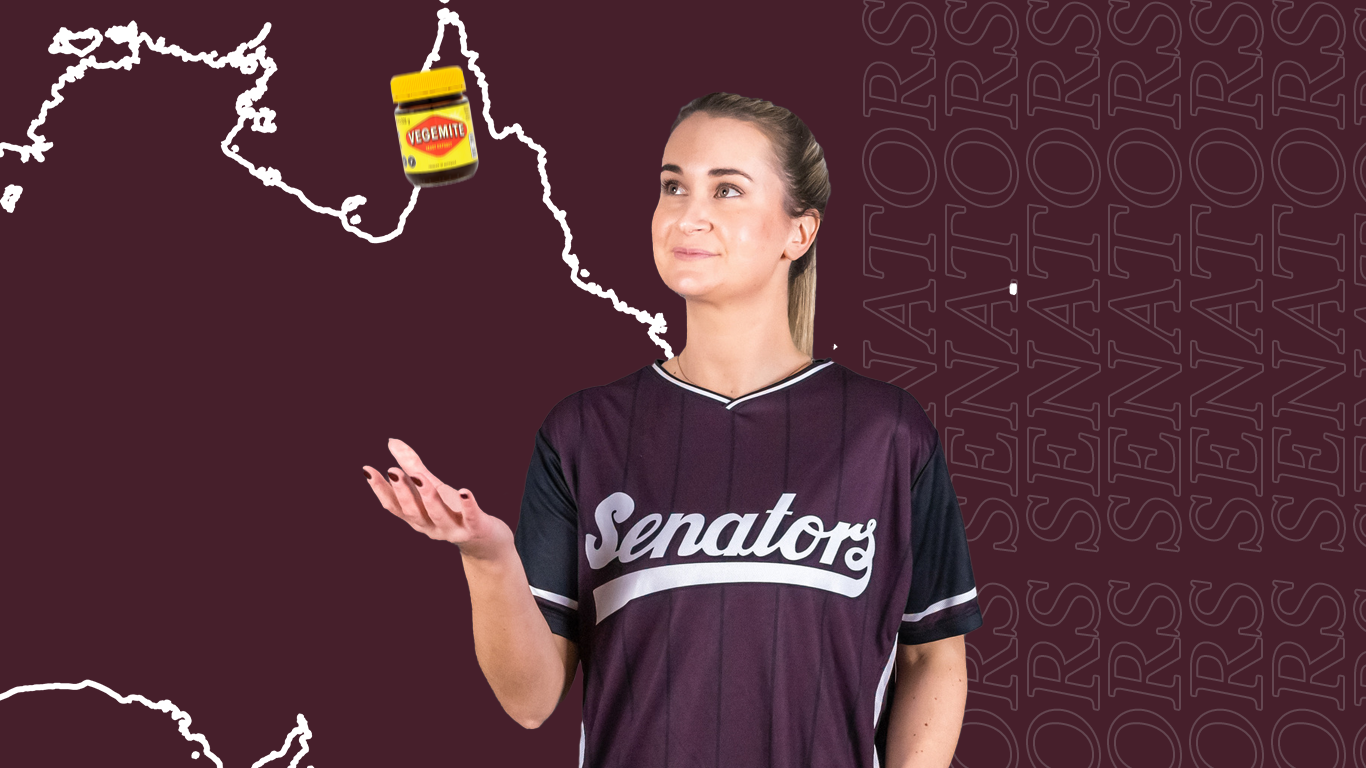 Patrice Armitage, the youngest member of the Düsseldorf Senators Softball family, undoubtedly has had the longest journey of all ladies in the team of head coach Frank Mohr.

Born in the coastal town of Gladstone, in the state of Queensland, she grew up in a softball-loving family. Not only did her parents get to know each other through the sport, but all her siblings have also been playing softball since the age of four. It is therefore not very difficult for Patrice and her three sisters to provide an almost complete infield. If it gets thin at 3B, the mother jumps in without further ado.

She was coached by her father, who played for Australia’s national team in Center Field and as a Pitcher and passed on his passion and dedication to his children.

“He never got tired of coming to the field to train with us, even after a long day at work,” she recalls. “He always had a smile on his face.” A smile he seems to have passed on to his daughter, because Patrice is a true cheerful nature and her friendly manner is very well received by the team.

Patrice is a complete player and can be used at all positions in the infield. When asked what position she wanted to play, she replied: “Every position that coach will put me.”

An answer that every coach likes to hear.

At the age of 19, Patrice left Gladstone and made her way to Brisbane to attend the college there. There, too, she continued her sporting career.

“Unfortunately, softball does not have the same importance in Australia as it is does in the USA for example and so in Australia it is only possible via regionally held tournaments to qualify for a national final tournament.”

Last year, she followed her partner, who had to go to Germany professionally, without further ado and found a new home in Düsseldorf. A new home, however, not without softball.

She was looking for clubs in and around Düsseldorf, with the senators catching her interest immediately. After taking a look at the pictures on Instagram and the first contact was helpful and friendly, the decision for her to join was made quite quickly.

“When I messaged you guys, I knew I had made the right choice.”

“We are not just about sports. We love and live softball and this includes the familiar atmosphere, which is very important to the team,” adds Frank Mohr.

Legendary are the After Game Dinners, which Patrice can look forward to. Whether victory or defeat, it is won and lost together and above all the team comes together to eat and chat. Everyone contributes something to the well-being of stomach and soul and surely everyone is looking forward to future Australian specialties. And there will be.

“It’s a very unique taste and seems to not be loved by many outside of Australia.,” she says, not withholding that she always has a large glass with her when traveling and is happy to share it with anyone who is brave enough to try it.

If asked what she expects from her new team, she will quickly find an answer.

“Some of the closest friendships I’ve made throughout my life have been made while playing sport. I see joining the Senators as an opportunity to meet people in a foreign country and a new city, that have a passion for a sport that is close to my heart.”

Softball overcomes borders and, in the case of Patrice, even continents and oceans.

Welcome to Germany and welcome to the Düsseldorf Senators.